Popol Vuh rarely performed live. Why was that? In a short interview dating from 1981 we read:

"Popol Vuh don’t play live. Florian feels that it would not be possible to sustain the kind of intensity that the music would require. For short periods yes, but not for a full concert. Touring would take up too much time; writing, recording, film making and his family are more important” (Neumusic)

In an interview from 1995 Fricke adds another argument:

I/e: We see very little of you when it comes to live performances. Does it just seem that way, of is there a reason?
Florian Fricke: No, that’s quite right. Our last live concert was four years ago. But that doesn’t mean that we might not suddenly play live again. The reason for not playing has to do with the life of the people that make up such a group (i/e Magazine).

So apart from several more or less practical reasons for not doing so, it seems above all that is for musical reasons that they didn’t often climb the stage. Namely, that it would be impossible to create the necessary intensity that the music requires. As far as we can conclude from these two short quotes.....

Alas the question remains unanswered what audience Popol Vuh wanted, and what contact? Also, considering the religious nature of their music, one could ask what Popol Vuh considered as the ideal context for their music. We go more deeply into this question in the ‘Religious music’- section of our enquiries.

Below we try to reconstruct an overview of their rare live appereances.

Popol Vuh did play live a few times during their Moog-period:

There exists a tape called ‘Radiosession of Seligpreisung’, also called ‘Baumburg Kirche Tapes’ that is followed by an interview with Florian Fricke, dating from 1973. Could be a live rehearsal. We hear no public on the tape. The article 'Popol Vuh: Ihre Musik ist eine Kirche' (Bravo, 1973) speaks of a performance of 'Seligpreisung' in the church of Baumburg in the summer of 1973, visited by the journalist and a few others. Maybe the recording was made on this occasion.

In an interview conducted by Gerhard Augustin in 1996, speaking of the ‘Hosianna Mantra’-periode, Augustin asks:

Gerhard Augustin: Did you, Conny Veit and Djong Yun ever perform as a band, publicly?
Florian Fricke: Yes we did, actually, in Lieberkosen and Munich.
In the same interview, Fricke makes another reference on touring by Popol Vuh: 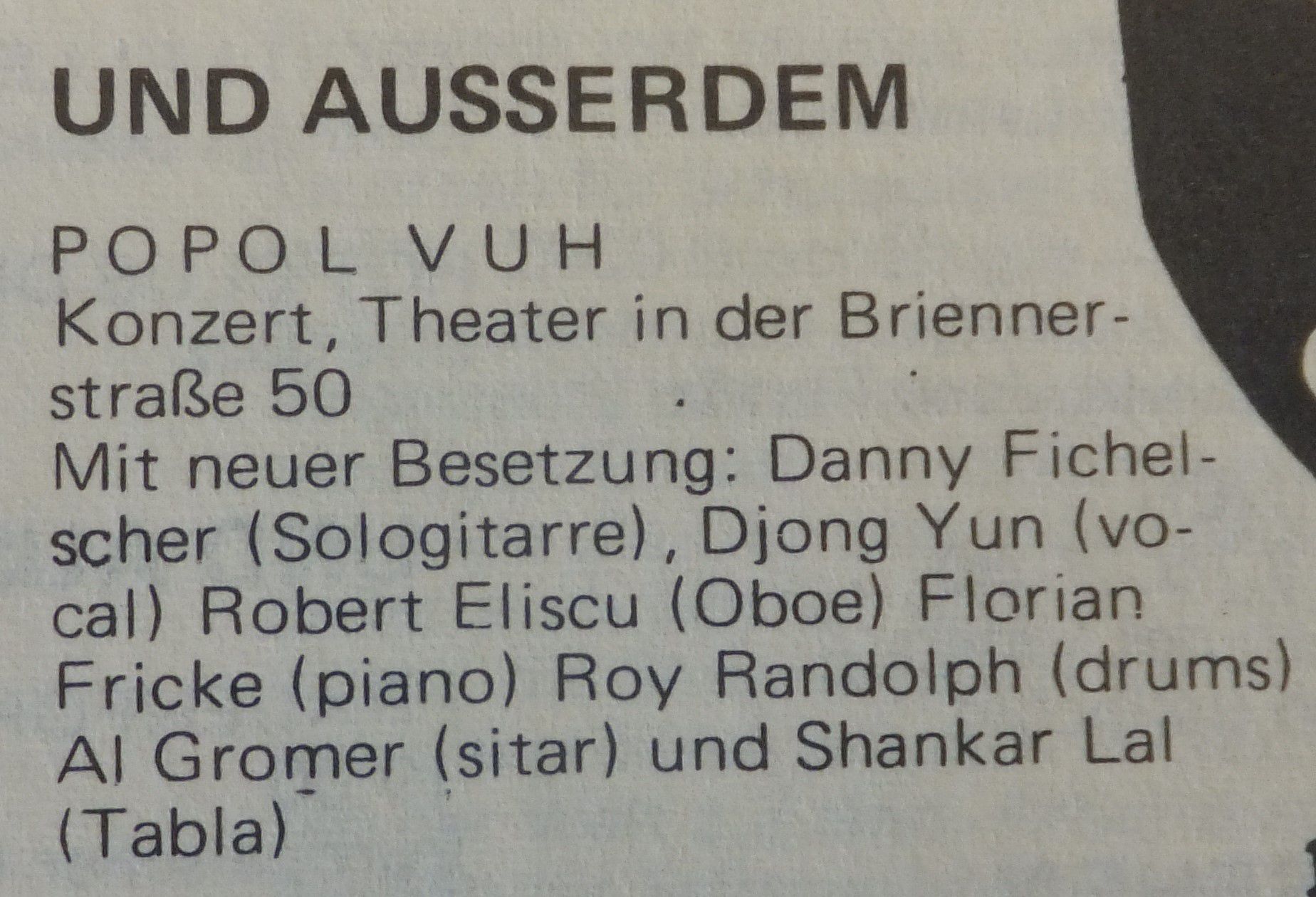 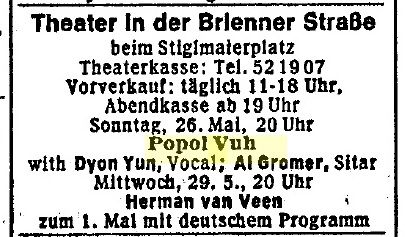 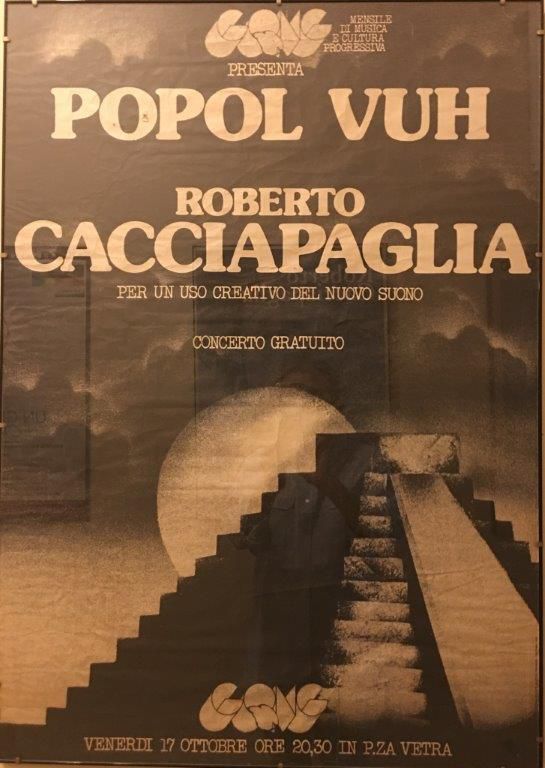 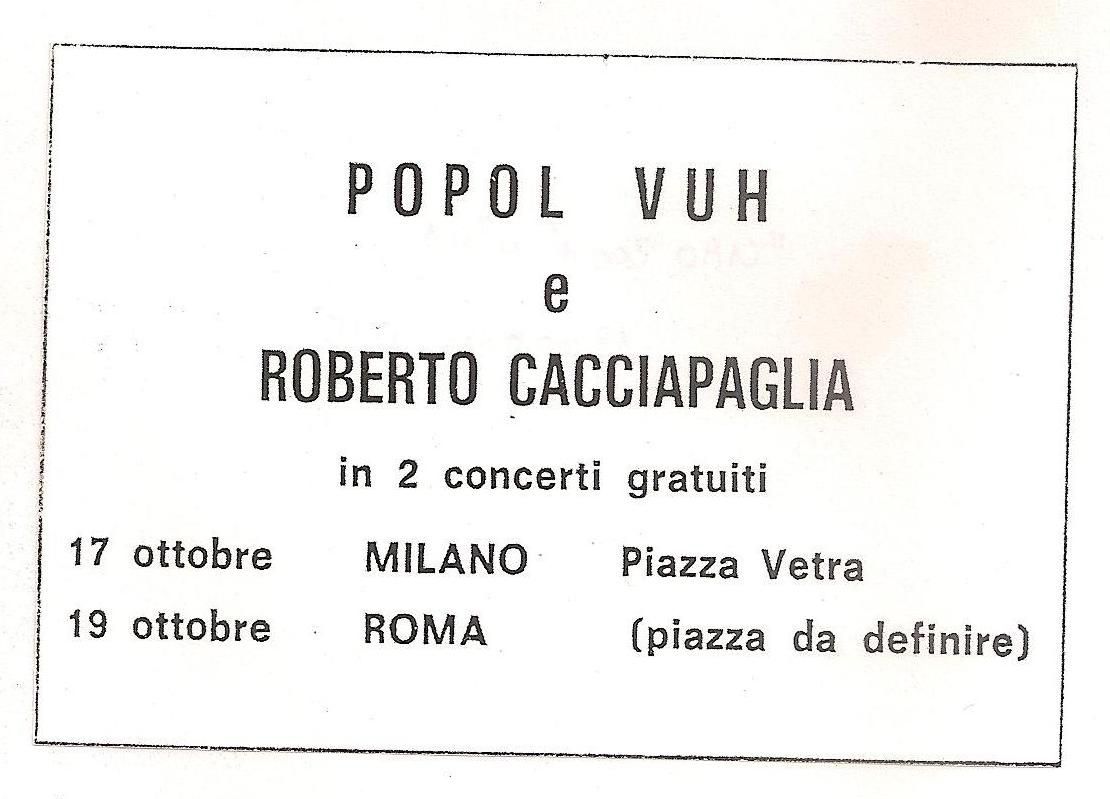 In 1975 they visited again Italy for a concert at the University ‘La Statale’ of Milan. The concert was promoted by the 'Gong' magazine (a magazine about progressive-experimental rock), after R.U. Kaiser established an agreement with the PDU label for licensing the Ohr/Pilz/DKK records in Italy.

The concert was opened by a very young Roberto Cacciapaglia, who played a part of 'Sonanze'. For this occasion Popol Vuh consisted of: Florian Fricke (piano and voice), Daniel Fichelscher (guitars) and Renate Knaup (vocals and percussion).
There exists a tape/bootleg from this concert.
According to Enrico Bassi the bootleg has the following playlist:

In an advertisement for ‘Letzte Tage, Letzte Nächte’ by United Artits in Sounds, nr.4, 1976 we read:

In an advertisement for ‘Brüder des Schattens - Söhne des Lichts’ by Brain Records we read:

“Bald auf Tournee!”
'Soon in concert’. Did this ever happen?

In 1986 the Ladakh Ecological Development Group (India) received the Right Livelihood Award, also known as the 'Alternative Nobel Prize'. This project was started by Helena Norberg-Hodge in 1978.
With his love for Tibet, Florian Fricke organized a concert by Popol Vuh at the Bamberger Haus in Munich. Helena Norberg-Hodge was present. Florian was playing that evening with Daniel Fichelscher and Renate Knaup.

In the ‘Cicaca Newsletter’of september 1987 Cicada Records announces the release of ‘Der Gesang der Engel’ and makes reference to this concert:

"Florian Fricke & Co are now recording a brand new album entitled ‘Der Gesang der Engel’. This time with a classical trained vocalist and Fairlight synth to create the magical choir. A part of the album will be used by Werner Herzog in his new movie ‘Cobra Verde’. This title and other Popol Vuh titles will be issued bu Cicada on cd. It might also surprise you that Popol Vuh recently played live in Munich."
In an interview by Laycock in 1989, Fricke refers to this concert in Munich:

Ian Laycock: You are still actively involved in music, then?
Florian Fricke:I do the albums and film music and occasional concerts from time to time....
Ian Laycock: I didn't know you played live!
Florian Fricke: Occasionally!
Ian Laycock: Where, then?
Florian Fricke: The last one was two years ago in Munich for a benefit concert for Ladakh, for a development fund to try to alter some of the bad effects of previous aid. Against all the concrete and such like being introduced. On the other side of that, it's difficult to get out that same sound that we can really watch over in the studio. So I'm really no fanatic for playing live!
Ian Laycock: Was it solo?
Florian Fricke : Daniel Fichelscher (ex-Amon Düül II) on guitar - he has such a big heart that man! - and we worked with an assortment of female singers, but I suppose that you would say that the core is Daniel and myself. When I've composed the things, then he's the next one that I play them with. I love working with him - a spiritual man!
(Audion, 1996)
1998

In 1998 Popol Vuh gave acte de présence on the Italian Time Zones Festival, where they performed their multimedia project ‘Messa di Orfeo’ in the labyrinth of Molfetta (Bari) on september 20th.
The recording was released as ‘Messa di Orfeo’ by Spalax (14562).

As live appearances of Popol Vuh were rare, reviews of their concerts even more. But from their Molfetta concert there exists one:

Harmonic Hummmmbug
For the past 13 years, the Italian seaport of Bari has been the venue for Time Zones, a festival of music and performance.
Arsalan Mohammad watched Krautrock veterans Popul Vuh try their hands at a little mass hallucination.
Under the patronage of soundtrack superstar Ennio Morricone, Bari's Time Zones Festival specialises in bizarre juxtapositions of music and environments. Brian Eno, Philip Glass, Nusrat Fateh Ali Khan, Ryuichi Sakamoto, Nico, Fela Kuti, John Zorn, Peter Hammill, Einstürzende Neubauten and David Sylvian have all played here. Run by a small team of local people, Time Zones always provokes unusual responses from performers and audience. None more so than from Popul Vuh, that legend of seventies German music.
Popul Vuh - which comprises Florian Fricke and Frank Fiedler - elected to play in the unlikely setting of Molfetta, a tiny fishing village dominated by a grand Byzantine church in the middle of a maze of cobbled streets. This was to be the site for a giant installation.
Good Rooms One To Five is based on the notion that twentieth-century human beings have lost the ability to access the "hallucinatory centres of the brain". These centres respond to certain specific frequencies (between 2000 and 5000 hz). According to Fricke, a scientist at Princeton University discovered that the sounds of bees and cicadas chirping and buzzing can stimulate these hallucinatory centres. The idea of doing a multimedia event came from Fricke's visit to a Munich installation by London's multimedia group Antirom. Concluding that this was "too cool", he decided to give it a go himself.

Since the early Moog-powered days of Popol Vuh, Fricke has been concerned with the effect of sound on perception. Popol Vuh's work from the mid-70s, especially their Werner Herzog soundtracks, saw Fricke combining these interests with a deeply spiritual sensibility. He led Popul Vuh on an erratic and unpredictable career, which included the dubious distinction of inventing New Age music. Vuh's second album In The Garden Of the Pharaohs (1970), predicts the whole ambient genre that Brian Eno went on to define with Here Come The Warm Jets. The Good Rooms project is a continuation of Fricke's exploration of the senses. "Music" he says, "is for me the means of realistically approaching Utopia".
So that evening, the streets of Molfetta were bathed in red and blue light. Above our heads televisions were suspended in wooden scaffolds between the buildings. Lining the route were small speakers emitting insect noises. The main square was bathed in huge projections of honeycombs, larvae and a detail from an ancient Greek fresco depicting Orpheus. In a smaller courtyard, around 50 people stood in a circle holding hands. In the middle, arms aloft, was Florian, his eyes closed. Slowly, he brought his arms down, breathing out. In a low hum, the choir followed him: "HHHHHHMMMMMMMNNN NNNNN". After a few seconds pause, he lifted his hands skywards again."BBBBBBZZZZZZZZZ ZZZZZZ!"

As people crammed in to have a look, any intentions Florian may have had of creating a spiritually uplifting atmosphere were lost in shouts, laughter and a general movement towards the harbourside bar.

Completely unfazed by this lukewarm response, Popul Vuh are looking forward to continuing their installation work. They plan to cover a Neapolitan cathedral floor with broken glass, steel, concrete and water, then to throw a thousand silver Euros onto the audience from the ceiling. "The Church will be very angry when they hear this," laughs Florian. "This is not just Good Room. It is to be called The Tears Of The Enlightened".

One year later Popol Vuh gave a reprise of ‘Messa di Orfeo’ at a festival in Fano (Italy), organized by Franco Battiato: 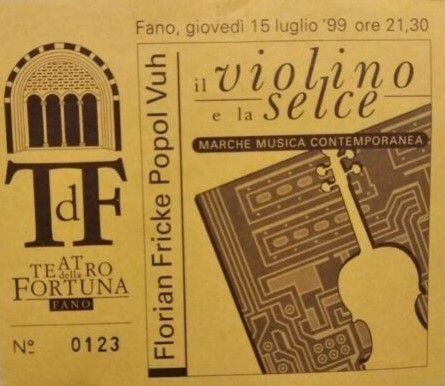