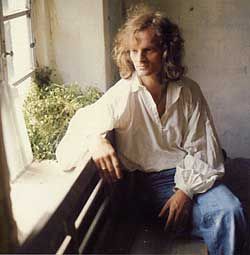 Florian Fricke plays the role of the blind pianist. In one scene Florian sits behind the piano and plays ‘Agnus Dei’.

198?:
“During the making of the ‘The Enigma of Kasper Hauser’in 1974, Herzog was at Florian’s house while he was playing the piano. He was improvising and just staring at the wall in front of him. Herzog passed comment on the fact that he was playing ‘blind’. A few days later Florian got a call to go to the set. A part had been specially written for him as Florian the blind and orphaned piano player.”(Neumusik)